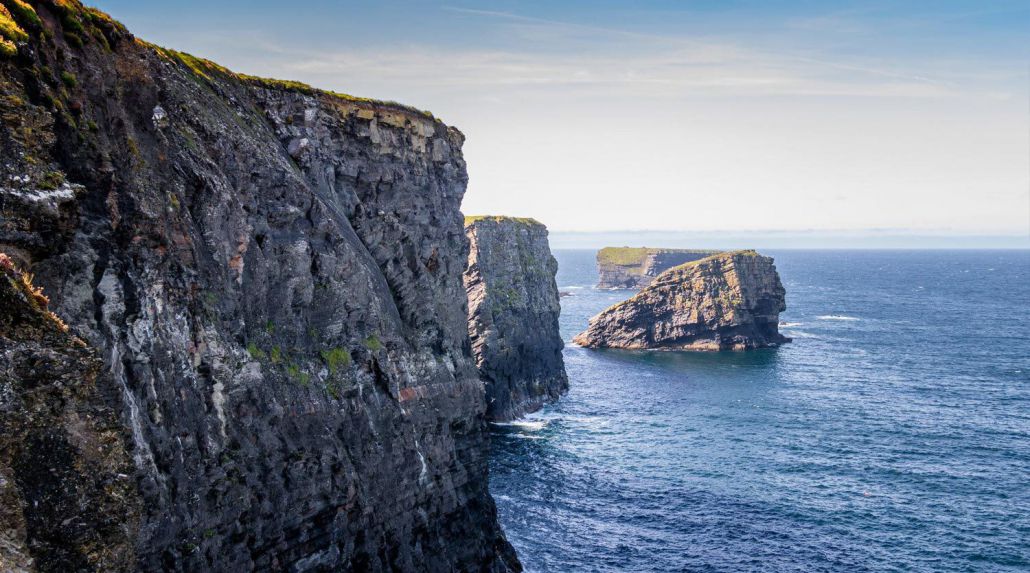 Whether or not you claim Irish roots, when you visit the beautiful Emerald Isle, strive to experience it authentically. Of course, you'll want to see the iconic sights, places and attractions. But travel is more than running through a laundry list of must-sees.

It's about slowing down for scenic surrounds and immersing oneself in nature. It's exploring off-the-beaten-path and learning how history informs today. And it's getting to know welcoming locals who may share insights into their way of life. Authentic travel is about discovering the destination's soul, gleaned by experiences that reveal a sense of place and culture.

Here are 10 Ways to Discover Ireland at its Best. 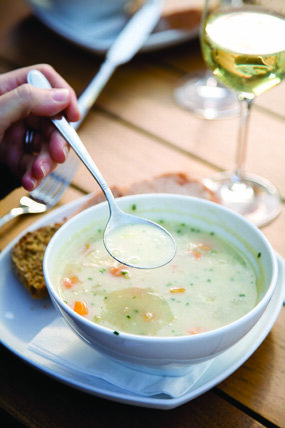 Part of any authentic travel adventure includes tucking into regional foods – drisheen, crubeens and boxty. Savour your first tastes of genuine Irish cuisine and the warmest of welcomes with a home-cooked meal. At places like Richenda's historic home, local lore is served up with your spuds, often grown there.

Pubs and restaurants also dish out traditional and reinvented classics, from hearty Irish stew and bacon and cabbage to steaming fresh-from-the-Atlantic seafood chowder with brown soda bread. Before long, coddle, champ and colcannon will be part of your new Irish vernacular.

Be King or Queen of the Castle 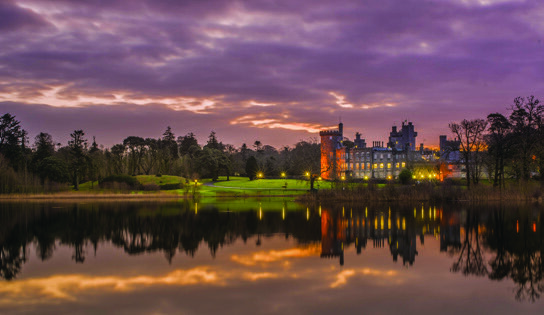 Castles, castles everywhere! Hundreds of stone tower houses and keeps dot the land, left in the wake of pitched medieval battles. Today, most are brooding, ivy-covered ruins the breeze blows through or totter atop sea-lashed promontories—mere fragments of the strongholds they once were. A few that time has more gently caressed, however, have been restored and breathe new life as luxury hotels. Bed-down like royalty in five-star edifices like 13th-century Ashford Castle Hotel & Country Estate, or the baronial Dromoland Castle.

Ride 'Round the Ring of Kerry
Allow a full day or more to explore the Ring of Kerry. Said to be Ireland's most scenic drive, it's a 179-kilometre, mostly coastal touring loop of the Iveragh Peninsula from the town of Killarney. It is famed for stunning vistas framed by Macgillycuddy's Reeks, Ireland's highest mountains, and white sandy beaches like Castlecove. Pull over at Ladies View to snap photos of Killarney National Park below, a nature haven with cascading waterfalls, woodlands and three tranquil lakes nestled at the base of the slopes. In Portmagee, at the end of the peninsula, look seaward to sight the island of Skellig Michael and the early Christian monastery that sits atop it, a UNESCO World Heritage Site.

Ponder the Past
As you tread this timeless land, you'll encounter archaeological and architectural gems around every bend – megalithic cemeteries, prehistoric forts, Iron Age beehive huts and Viking remains. Although the isle is wee – just over 70,000 square kilometres, it harbours thousands of archaeological sites, a repository of human history dating to Mesolithic times, some 9,000 years ago. Don't miss the "lost" 12th-century Norman town of Newtown Jerpoint, where St. Nicholas reputedly rests. He was the philanthropic Bishop of Myra, who is believed to have inspired the legend of Santa Claus. 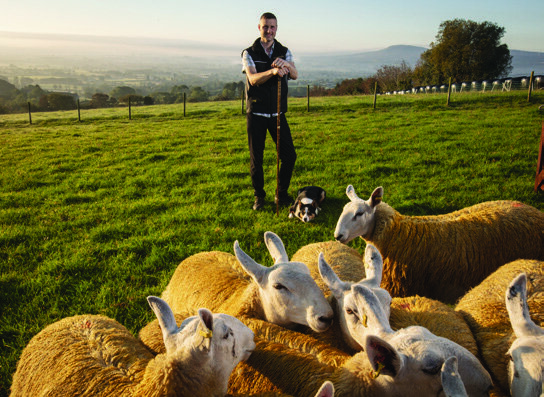 Go Barefoot on a Beach 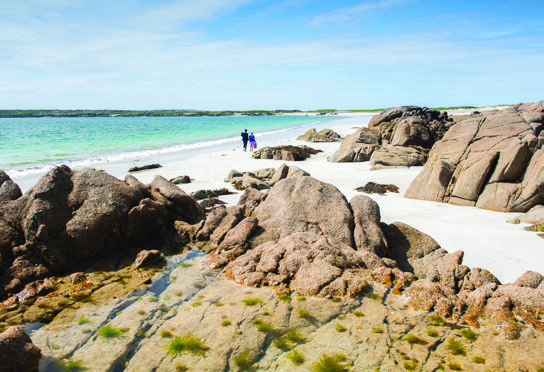 While hitting the beach may not be top of mind when visiting Ireland, do as the Irish do. With a coastline stretching more than 5,500 kilometres, the isle boasts a bevy of breathtaking beaches. Stroll one or more, and sink your toes in sugar-soft sands. When a refreshing dip beckons, take your pick of the 90 bathing beaches awarded international Blue Flag status for water quality and environmental management. Inch Strand, the country's longest, is perennially popular, while County Galway counts two of the finest – the startlingly white Gurteen Beach and Dog's Bay.

Learn the Languae of Literary Legends
Steeped in rich literary tradition, capital Dublin is a mustvisit for lovers of the written word. The city's literature greats include George Bernard Shaw and William Butler Yeats (both of whom won the Nobel Prize for Literature), as well as James Joyce, whose beloved 1922 masterpiece Ulysses is set in the city's streets and pubs. Delve into the works of these and other celebs in the Dublin Writers Museum, housed in an 18th-century mansion. And don't miss a visit to Trinity College's Old Library, across the River Liffey in the city's heart, to view the famed Book of Kells, a ninth-century illuminated gospel manuscript (text with intricate hand-coloured pictures) crafted at the Kells Monastery. It is said to be the most beautiful book in the world.

Join in the Craic! 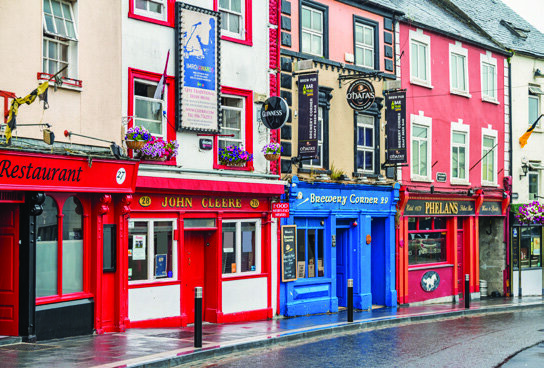 Pronounced "crack," you'll hear this ubiquitous Gaelic word – loosely meaning enjoyable conversation, entertainment and fun – time and again. Whether you're a frequent pub-goer or not, sample the hospitality for which the Irish are known in the lively pubs that are the heart of the isle's social culture. Traditional Irish folk dancing, called ceili, is often on show, along with spirited, toe-tapping traditional music sessions. Strike up a conversation and you'll discover that the friendly Irish are endowed with the gift of the gab (thanks, Blarney Stone) and a talent for telling lovely, lilting stories. 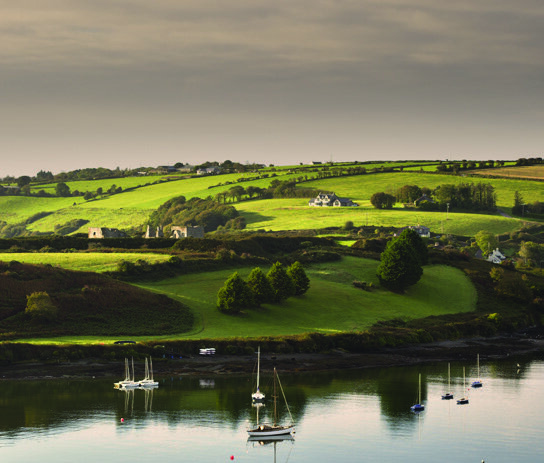 Share a yarn or two with the affable folks of Ireland's west. Stretching 2,500 kilometres from Ireland's stem to its stern, the Wild Atlantic Way is the longest defined coastal touring route in the world. Starting at the tip of Malin Head in northern County Donegal, the route hugs the curvaceous contours of the western Atlantic seaboard all the way to Kinsale Harbour in County Cork, on the isle's southern tip. Whether your time permits exploring just a wee segment or you have the leisure to meander the entire route, you'll experience Ireland like a local in the centuries-old villages dotting the coastline. Tourism Ireland makes discovering the country easily and authentically with signposted discovery points and pre-planned itineraries.